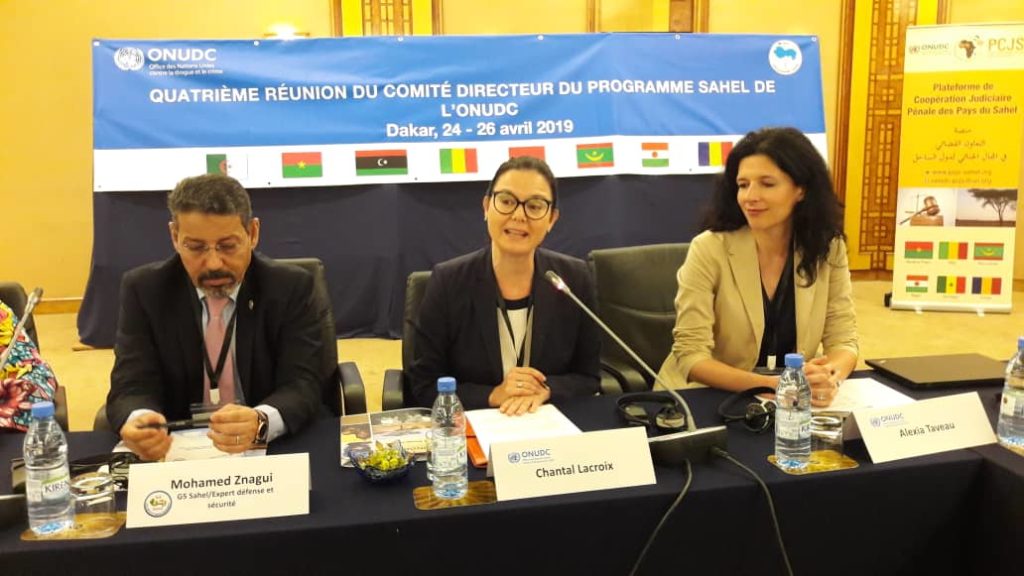 From 24 to 26 April 2019 the 4th Meeting of the Steering Committee of the Sahel Programme of the United Nations Office on Drugs and Crime (UNODC) was held in Dakar, Senegal.

As of January 2019, the Sahel Programme has implemented over 600 activities and reached more than 15,000 direct beneficiaries, reaching positive operational results thanks to the support of contributions from Austria, Canada, Denmark, France, Germany, Japan, Luxembourg, the Netherlands, Norway, and the United States. These results were also achieved thanks to the strong partnerships developed by the Sahel Programme, with the UN family to contribute to the “delivering as one” strategy, and with other organisations in the region to ensure it provides the best possible support to Sahel countries in their fight against terrorism and organized crime.

The objective of this 4th meeting was to discuss the strategic direction of the Sahel Programme with government counterparts and relevant stakeholders to guide implementation strategy. The meeting reunited 40 participants from Algeria, Burkina Faso, Chad, Libya, Mali, Mauritania, Morocco, Niger and the G5 Sahel as well as UNODC staff from the Regional Office of West and Central Africa and the field offices.

A representative of the Counter-Terrorism Unit of the Regional Office for West and Central Africa of UNODC presented the Sahel Judicial Cooperation Platform (PCJS), the missions of the focal of points of the Platform, the domains of intervention, technical assistance tools related to international cooperation and perspectives

At the end of the meeting several recommendations have been suggested by participants, including one regarding the PCJS: “Support the invitation of the Ministers of Justice to the G5 Sahel Council of Ministers to discuss partnership opportunities between the Sahel Judicial Cooperation Platform (PCJS) and the G5 Sahel”.

The UNODC Sahel Programme has been developed within the framework of the UN Regional Integrated Strategy for the Sahel (UNISS), which the UN Secretary-General launched in June 2013. Furthermore, in the framework of the United Nations’ Agenda 2030, and through its work at global, regional and national levels, UNODC provides support to Member States to reach their targets under the various Sustainable Development Goals (SDGs). More specifically, UNODC’s Sahel Programme contributes primarily to SDGs 5, 10 and 16.